Wuppertal, January 2014 - Invented in 1864, woodchip has proved itself on the market for 150 years, particularly in German living rooms.There is hardly a household in which the popular wall covering is not to be found. On the occasion of this major anniversary, Erfurt would now liketo thank its customers with an attractive retail promotion. From 1st March to 30th April 2014, the anniversary rolls of Rauhfaser Classico woodchipand Vlies-Rauhfaser Classico non-woven woodchip will include an extra five metres in participating DIY and trade discount stores.

Woodchip and non-woven woodchip stand out from the crowd thanks to their positive propertiesTheir individual design ability and ease of handling have made Erfurt woodchip wallpapers into timeless classics. There is a perfect texture to suitevery taste, from coarse to fine, and from long-fibre to cubic. And non-woven woodchip has long been amongst the classics of wall coverings: its specialfeature is that it can be hung directly from the roll onto the pasted wall, simply being pressing into place. At the same time, it has all the positivefeatures of woodchip, above all its harmlessness in environmental and health terms. As it is manufactured without the use of solvents, plasticisers orPVC and primarily using recycled paper, the timeless wall covering contains no harmful substances, is breathable, moisture-regulating, suitable forallergy sufferers and can even be composted. This is further confirmed by the TÜV Nord and Oekotest seals awarded to woodchip.

All-purpose woodchip and the 'turbo' non-woven woodchip solution are thus suitable without exception for all homes and their inhabitants –from toddlers to allergy-sufferers. The attractive promotion to celebrate the 150th birthday of woodchip is therefore the ideal opportunity to bringhealthy living into your own four walls. More on this and all other Erfurt products at www.erfurt.com . 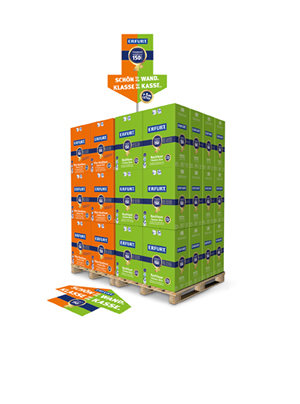